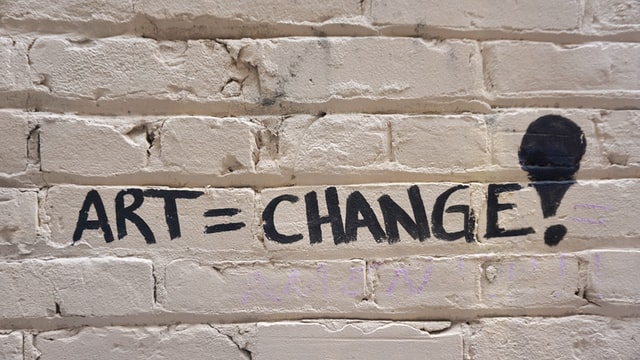 A guest contribution by Bärbel Hartrumpf

A lot has happened since then.

I moved to Bremen and now specialize in historical performance practice. My main instrument is no longer – as it was when we met – the modern cello, but the baroque cello. These changes did not come suddenly for me at all, but have made their way quite naturally.

Nevertheless, since then I have become aware not only of the positive but also the negative sides of change. On the positive side, change creates new opportunities. They open up new room for maneuver and sometimes they can even break old patterns.

And yet there is also this fear of impending or already implemented changes.

Because they can be very uncomfortable, as they also represent a great unknown. And this unknown is often accompanied by helplessness, as our tried-and-tested recipes are challenged and often lose their validity, much to our dismay.

Then we feel like little children at the foot of a huge mountain again, of which we have no idea how to climb it.

Overstrain and despair, even fainting, then spread. Truly not nice feelings, which we prefer to avoid with good reason. After all, this is not the first time we have faced such a mountain in our lives.

And don’t we all wish we could find a way to get to the top,

put our feet up, pop the crown cap, enjoy our after-work beer and finally relax?

And life is a perpetual course of both minute, microscopic, and major changes.

If one would think in this sense the desire “finally to arrive” / “finally to be finished” in all its consequence to the end, this can mean nevertheless only death. And nevertheless even in death change is still included, because our body decomposes and forms new important nutrients for nature.

There is something frightening about these considerations. Precisely because in today’s society we don’t like to deal with such things. Wherever we move, healthy bodies bursting with strength beam at us from posters.

Subconsciously, we are constantly being told that we have to be in full control of our lives.

And who knows, maybe this claim is even possible, but only if we put on blinders. Which in the end would be very one-sided and a pity, because one would miss a lot.

And Alexander Technique means for me to learn to perceive every little change and its effect. For example, a single thought can cause me to breathe into my lower abdomen, my shoulders to finally relax, and I can suddenly feel my intestines shifting in my body in a new way. A discovery in one of my lessons with Stefanie, which fascinated me very much and of which I would never have thought before that such a thing exists at all and then it also gurgles so beautifully.

I owe Stefanie not only this discovery, but also the discovery of the Alexander Technique in general. In her I have found a teacher who makes you aware of changes and teaches you the joy of them, no matter how small. And her joy in experimentation makes it possible that I feel just as much at home with her with the baroque cello as with the modern cello. 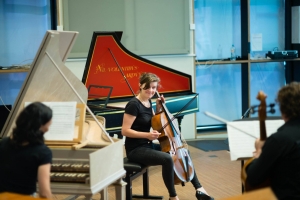 If you struggle with backpain when you transition between baroque cello and modern cello I´  m happy to support you. We´  ll systematiclly analyse what the different material demands and how you respond with your physical self to it. The goal is to develop two “registers” or “patterns” you can easily swap depending on the instrument you´  re about to play.

This can also be done online via Zoom. Please use my contact form. I´  m looking forward to hearing from you!

What learning to play the cello and to run have